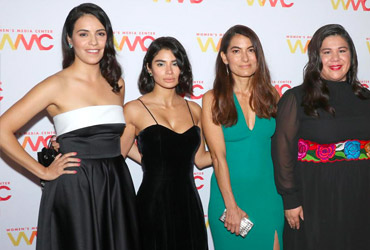 After the success of the soft launch of The Latinx House in October, the doors are open. Founders Mónica Ramírez, Olga Segura and Alex Martinez Kondracke –the inspirational figures behind the Querida Familia letter with America Ferrera, Eva Longoria and Diane Guerrero–are launching the initiative at the Sundance Film Festival where it’s the first time a Latinx organization is an official partner. During the weekend of January 24-26, the space in downtown Park City will serve as a gathering place for Latinx filmmakers, storytellers and their allies. “We’re having an event with Netflix. We’re having a panel that’s going to feature America Ferrera,” Alex, who is no stranger to the festival as a filmmaker, tells HOLA! USA. “We’re going to have some amazing parties and some amazing other panels.”

Some of the other events include an afterparty for Siempre, Luis, a documentary about Lin-Manuel Miranda’s father, who was a former head of New York Mayor’s Office for Hispanic Affairs, and a conversation with Time’s Up that will be led by Eva Longoria. “It’s important that people understand that we’re not just organizing an event,” Mónica, who has been at the forefront of activism with her nonprofit Justice for Migrant Women, shares. “[We have] a much broader mission and vision that is really focused on centering and uplifting the power and the positive contributions of the Latinx community. If the Latinx and entertainment communities start modeling this behavior of helping each other out, there’s this ripple effect. That’s, I think, one of the best outcomes that could come of this.”

Mexican-born Olga would have loved a forum like The Latinx House when her film Emanuel and the Truth about Fishes was featured in 2013. “It’s having that connection where it’s not just people from the entertainment industry but actually the unification of advocates, activists and art and music,” she adds. “There are movies from Argentina, Chile, Mexico,” with Alex chiming in: “There’s a huge Latinx presence at Sundance this year among the films that have been accepted. We’re super excited about that, and we feel like it’s serendipitous.”

The Latinx House will then have prominent posts at South by Southwest and the Democratic and Republican National Conventions. Keep reading to learn how these women along with the support of many more including one surprising non Latina ally are going to change the narrative for the Latinx community.